Though the concept of schema for your SEO may sound like a relatively new concept, it is actually something that been around for many years now.

The collaborative between Google, Yahoo, Bing and Yandex, known as Schema.org, has resulted in a new way of defining data on internet pages: with standardized tags called microdata (or “schema”).

The introduction of “rich snippets” by Google in 2009 is what got more people excited about schema and its potential. Though originally the syntaxes used for rich snippets were RDFa and Microformats, it is now JSON-LD (JavaScript Object Notation for Linked Data) that you should be using as it is the preferred format of Google.

One thing I must mention about schema is that it is a complex beast, and not something that everyone can jump into right away. In this chapter, I briefly go through the concept of schema and how it is used, but not in as much detail as possible. It is something that is deserving of its own book, and a single chapter here is not going to do it justice.

An introduction to the concept of Schema, and what exactly it is and why it is important for your on-page SEO efforts

How Does Schema Work?

What is Schema Used For?

Schema has many uses and can be used to help Google learn more about your website, as well as for rich snippet features

Writing your own Schema markup is the best option, but it isn't easy, which is why many people rely on plugins or online generators

With Schema you can stack multiple blocks of data into a single piece of markup, which is very beneficial for your website

Displaying stars and a rating in your SERP listing is a surefire way to grab peoples attention, and Schema can help achieve that

Schema can be complex, so it's very important that you are properly testing your markup using it on your website

Adding Schema to you Site

“Mastering On-Page SEO” is available from all Amazon stores worldwide. 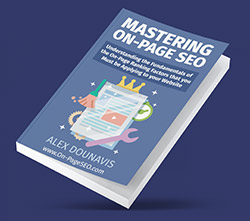 This website has been developed to accompany the “Mastering On-Page SEO” book, and looks at the main factors involved in on-page SEO and guides you through why they are important, and what you need to do on your own site to make sure it is properly optimized.

Everyone who has purchased the book is eligible to register as a member and access the on-page SEO information online, as well as various extras that, for obvious reasons, couldn’t be included in the book.